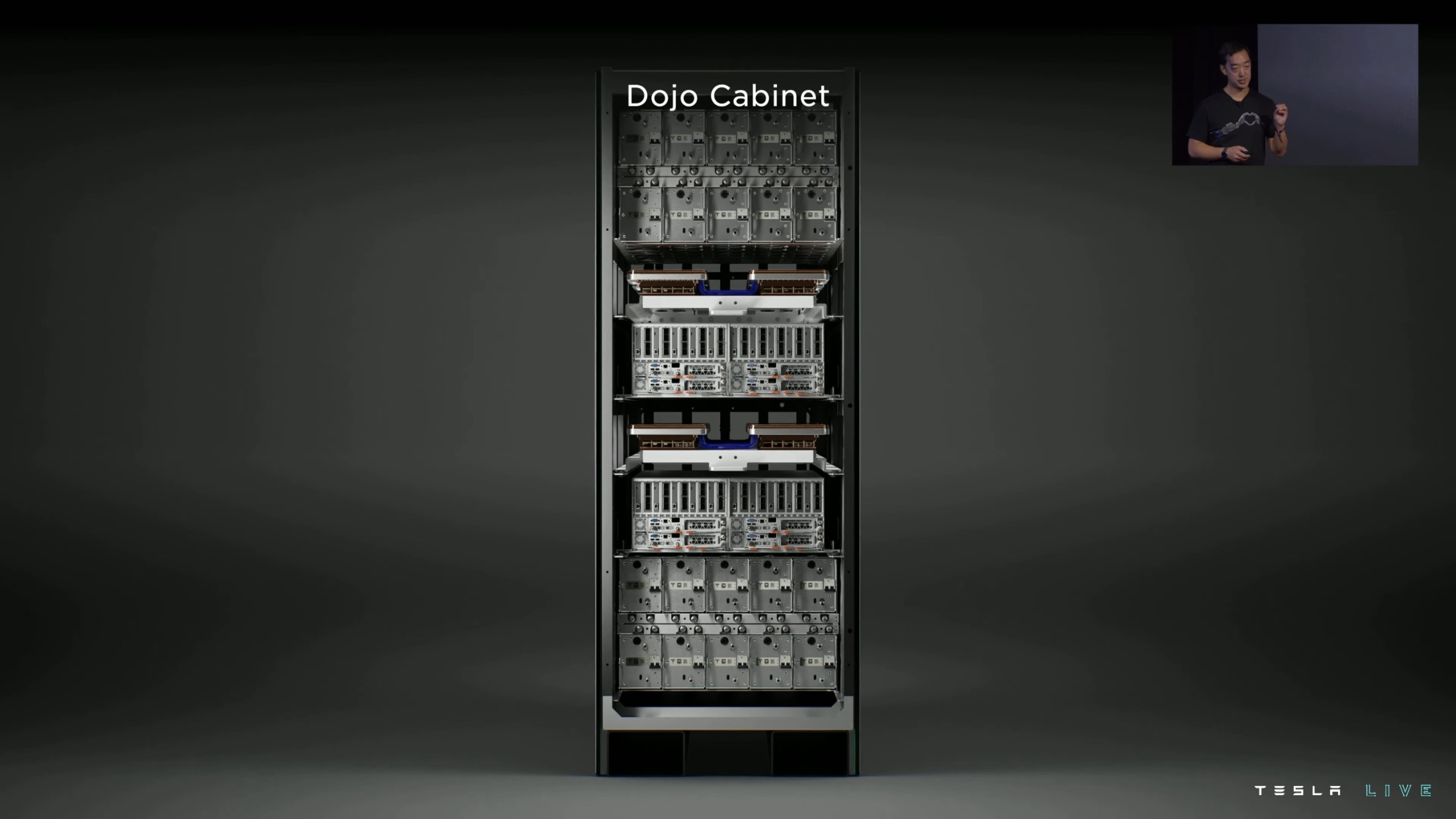 By Ryan Daws | October 3, 2022 | TechForge Media
Categories: Artificial Intelligence, Companies, Machine Learning, Robotics,
Ryan is a senior editor at TechForge Media with over a decade of experience covering the latest technology and interviewing leading industry figures. He can often be sighted at tech conferences with a strong coffee in one hand and a laptop in the other. If it's geeky, he’s probably into it. Find him on Twitter: @Gadget_Ry

The supercomputer has transitioned from just a chip and training tiles into a full cabinet. Tesla claims that it can replace six GPU boxes with a single Dojo tile, which it says is cheaper than one GPU box.

Per tray, there are six Dojo tiles. Tesla claims that each tray is equivalent to “three to four full-loaded supercomputer racks”. Two trays can fit in a single Dojo cabinet with a host assembly.

Such a supercomputer naturally has a large power draw. Dojo requires so much power that it managed to trip the grid in Palo Alto.

“Earlier this year, we started load testing our power and cooling infrastructure. We were able to push it over 2 MW before we tripped our substation and got a call from the city,” said Bill Chang, Tesla’s Principal System Engineer for Dojo.

In order to function, Tesla had to build custom infrastructure for Dojo with its own high-powered cooling and power system.

An ‘ExaPOD’ (consisting of a few Dojo cabinets) has the following specs:

Seven ExaPODs are currently planned to be housed in Palo Alto.

Dojo is purpose-built for AI and will greatly improve Tesla’s ability to train neural nets using video data from its vehicles. These neural nets will be critical for Tesla’s self-driving efforts and its humanoid robot ‘Optimus’, which also made an appearance during this year’s event.

Optimus was also first unveiled last year and was even more in its infancy than Dojo. In fact, all it was at the time was a person in a spandex suit and some PowerPoint slides.

While it’s clear that Optimus still has a long way to go before it can do the shopping and carry out dangerous manual labour tasks, as Tesla envisions, we at least saw a working prototype of the robot at AI Day 2022.

“I do want to set some expectations with respect to our Optimus robot,” said Tesla CEO Elon Musk. “As you know, last year it was just a person in a robot suit. But, we’ve come a long way, and compared to that it’s going to be very impressive.”

Optimus can now walk around and, if attached to apparatus from the ceiling, do some basic tasks like watering plants:

The prototype of Optimus was reportedly developed in the past six months and Tesla is hoping to get a working design within the “next few months… or years”. The price tag is “probably less than $20,000”.

All the details of Optimus are still vague at the moment, but at least there’s more certainty around the Dojo supercomputer.