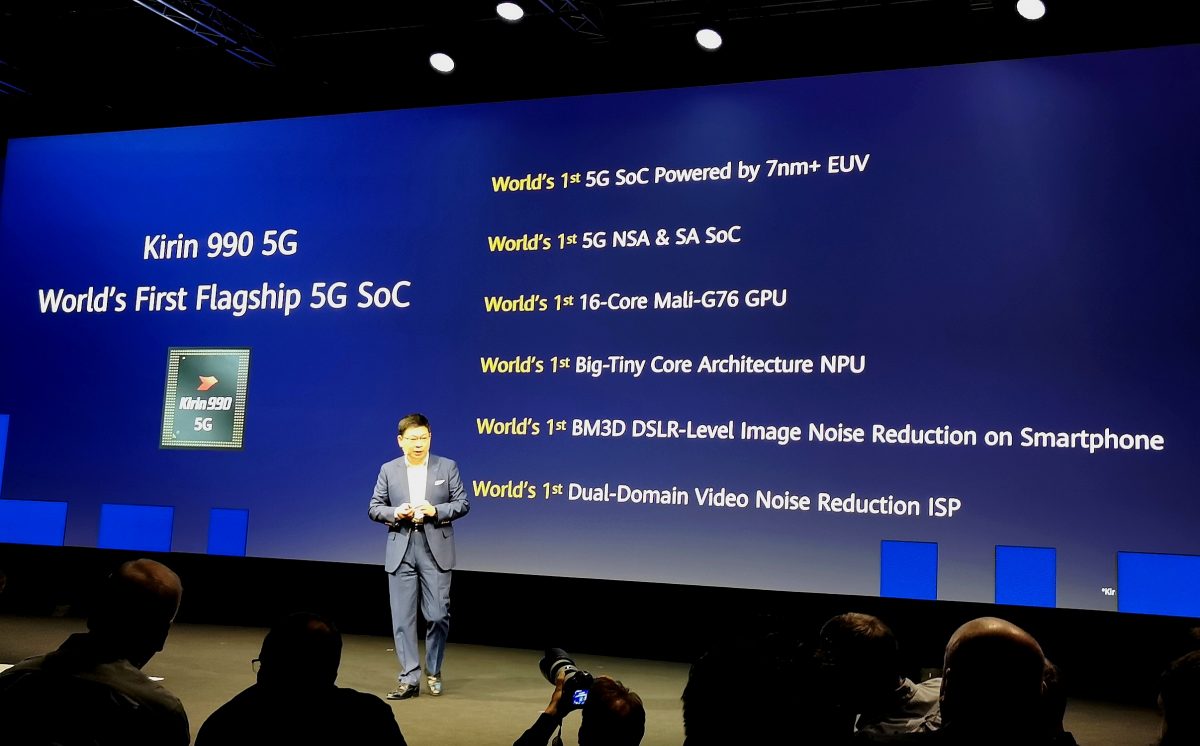 By Ryan Daws | September 6, 2019 | TechForge Media
Categories: Artificial Intelligence,
Ryan is a senior editor at TechForge Media with over a decade of experience covering the latest technology and interviewing leading industry figures. He can often be sighted at tech conferences with a strong coffee in one hand and a laptop in the other. If it's geeky, he’s probably into it. Find him on Twitter (@Gadget_Ry) or Mastodon (@gadgetry@techhub.social)

During an opening keynote at IFA Berlin, Huawei CEO Richard Yu debuted the Kirin 990 as the world’s first SoC with AI and SA 5G capabilities.

“The Kirin 990 has been fully upgraded in terms of performance and power efficiency, AI computing, and ISP, extending mobile phone experiences to a new level,” says Yu.

Huawei’s new SoC is the first to pack a dual-core NPU built on the Da Vinci architecture, which comprises of large NPU cores and “tiny” NPU cores. The idea is that the large cores provide high performance and power efficiency in heavy computing scenarios, while the tiny cores are used for low power consumption applications.

This is how the Kirin 990 compares in terms of performance and efficiency to other leading chips:

“We are providing not only the best, most powerful AI processing performance, but also bringing the best energy efficiency,” says Yu.

If you’re wondering why we’re covering a new ISP, it’s for this very reason:

Yes, that’s a person’s heart rate and respiration being measured by a camera thanks to AI combined with Huawei’s new ISP. The future societal ramifications of such technology are sure to generate debate – for example, it’s easy to imagine people being singled out at security checkpoints if a heart rate spike is detected – but, for now, it shows Huawei’s technological leadership.

Huawei also demonstrated how the Kirin 990 supports real-time multi-instance segmentation. In layman’s terms, it enables the real-time selection and modification of certain parts of a video. This could mean increasing the size of objects or people, creating layers, or completely replacing the background, all without the need for a green screen.

You can see the multi-instance segmentation in the demo below:

Huawei feels like it’s on a mission to show how important it is to the global technology landscape amid finding itself in the crossfire in the US-China trade war and facing claims it poses a national security threat.

Ahead of Yu’s keynote, the music video for ‘Radio’ by German rock legends Rammstein was played. The song is a political statement about fake news, which Huawei feels it’s been repeatedly subjected to. Huawei even has a Twitter account called @HuaweiFacts which aims to counter it.

Huawei keeps black swans, which once gave Europeans a shock when they first arrived, in the middle of a lake at its research campus. To their researchers, it’s intended to be a constant reminder to consider the unexpected and prepare for it.

We’ll leave security matters to the experts, but there’s little denying Huawei’s innovation and impact on the market in all the areas it operates. AI, in particular, is an area where Huawei has really excelled.

Huawei was keen to highlight where it had already achieved two world firsts in mobile AI with the Kirin 970 and 980:

Qualcomm is arguably Huawei’s closest Western counterpart, but it has lagged behind its Chinese rival in areas like AI.

In one slide, Huawei highlighted the performance of the Kirin 990 across ten key areas when compared with Qualcomm’s Snapdragon 855+X50:

The Kirin 990 will launch alongside the Huawei Mate 30 during an event in Munich on the 19th September 2019. We’ll be putting it to the test as soon as possible.

Disclaimer: Our travel and accommodation expenses for the keynote were covered by Huawei, but our reporting is entirely independent.