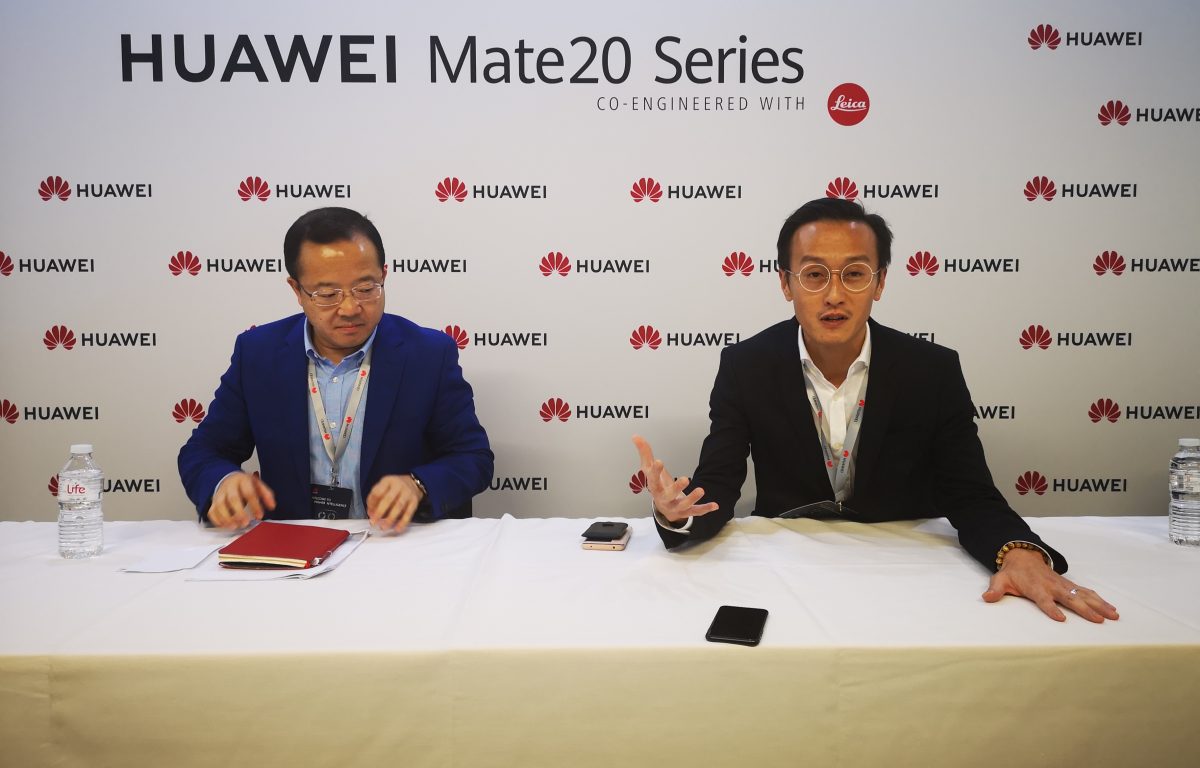 By Ryan Daws | October 22, 2018 | TechForge Media
Categories: Machine Learning, Virtual Assistants,
Ryan is a senior editor at TechForge Media with over a decade of experience covering the latest technology and interviewing leading industry figures. He can often be sighted at tech conferences with a strong coffee in one hand and a laptop in the other. If it's geeky, he’s probably into it. Find him on Twitter (@Gadget_Ry) or Mastodon (@gadgetry@techhub.social)

Dr Chenglu Wang (left in picture) has been with Huawei for over four years and has overseen the integration of AI with the company’s products.

Together, they offer the following capabilities:

According to Wang, the adoption of the HiAI platform is meeting Huawei’s expectations. However, some features – such as ASR and NLU – are still locked to China.

When asked when more of HiAI’s features will expand to other regions, Wang responded:

“Huawei’s consumer cloud is not so popular globally. However, this year we will launch some consumer services in Europe so maybe we can see more deployed globally… maybe we can get some alignment with China.”

This year, with the Mate 20, Huawei has debuted the Kirin 980 which boasts the world’s first dual-NPU (Neural Processing Unit). Huawei claims it offers an incredible 226 percent improvement over its predecessor.

Our first question to Wang was if the Kirin 980’s extra performance has allowed Huawei to do anything it couldn’t with the 970. Wang couldn’t provide any examples and even said: “It’s almost the same”.

When asked if that means Mate 20’s AI features will be coming to last year’s model, Wang said they will be.

However, a slide provided by the company provides more detail about the benefits of switching from a single NPU to a dual:

As mentioned in our video review of the Mate 20 Pro’s AI features at the bottom of this article, and confirmed by the above slide, real-time video processing takes a lot of power. It will be interesting to see how the Kirin 970 handles things such as the real-time AI colour video effect if it’s truly coming to Kirin 970 devices.

In recent weeks, Huawei pushed an update which switched off the ‘Master AI’ automatic camera scene recognition feature that debuted in the Mate 10. The feature can be re-enabled in the settings but is now off by default.

Master AI was a focal point of both the Mate 10 and P20 launches and we always felt it served as a great example of how AI can make life simpler. The feature provided better results when taking a picture unless the individual has time, and know-how, to manually change settings on a scene-by-scene basis.

When asked why Huawei took the decision to switch off such a prominent feature, Wang responded:

“Master AI is Huawei’s first try to use an AI-enabled camera. After we launched this functionality, they don’t like the phone… so we’re changing strategy. We give the basic capability and give this feature as an option, not just automatically.”

The explanation makes some amount of sense. As a techie, it can sometimes be difficult to put yourself in the view of a standard consumer. The average person, however, often just wants a phone with a camera that works as they expect.

Back in April, Huawei VP of Software Engineering Felix Zhang said the company wants to introduce the first digital assistant with ‘emotional interactions’.

Many industry leaders are working towards such a landmark moment but Zhang provided no timeline as to when Huawei expects to launch its own. We asked Wang when he expects such a digital assistant to become available.

“From a software view, it’s still a very big gap,” he said. “Maybe two or three years if the industry can work together.”

You can find our video showing the Mate 20’s AI features below:

Interested in hearing industry leaders discuss subjects like this and their use cases? Attend the co-located AI & Big Data Expo events with upcoming shows in Silicon Valley, London, and Amsterdam to learn more. Co-located with the IoT Tech Expo, Blockchain Expo, and Cyber Security & Cloud Expo so you can explore the future of enterprise technology in one place.